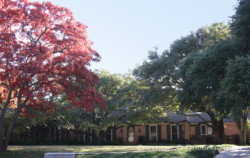 The President and Laura Bush will move to a sprawling 8,501-square-foot house in an ultra-chic North Dallas enclave next year - a $3 million deal completed just days after the stock market's big crash.

Despite the national nosedive in real estate prices, the Bushes appear to have paid top dollar for the house.

Their new neighbors in leafy Preston Hollow include oilman T. Boone Pickens, billionaire Dallas Mavericks owner Mark Cuban and Thomas Hicks, the guy said to have made Bush rich when he bought out his share of baseball's Texas Rangers.

The White House on Thursday revealed the Oct. 3 deal, which closed four days after the Dow Jones plunged 777 points. The sale stayed under wraps for two months because Bush's accountant was the listed buyer.

While the price was not disclosed, The News has learned the Bushes paid about $3 million. The previous owners were Daniel Boeckman, a Dallas developer and his wife, Laura.

"He [Bush] didn't get a good deal because he closed before the worst of the crash," said a source close to the sale. "He paid full price, but it's a fair price. The owners didn't jack up the price because it was Bush or discount it because of the economy."

Built in 1959 and recently renovated, the home boasts 1.13 acres, four bedrooms, 4-1/2 baths, a wet bar and a separate servants' quarters.

One feature Bush is said to especially like is a covered back patio with a large fireplace, where the couple plan to entertain guests and hang out.

The Bushes won't be moving in until February or early March. They're planning a top-to-bottom paint job and will convert one of the four bedrooms into a workout room.

"The Bushes paid full price on the least expensive street in Preston Hollow, but it's a great deal," said local Realtor Douglas Newby, who handled the priciest parcel in town, Hicks' estate, worth $75-to-$100 million.

"This is a home that fits their criteria - privacy, security - and... [is within] their $2.5 million to $3 million price range," Newby said. "It's both modest and grand."

The property is on a quiet cul-de-sac that seems to offer everything a former President could want - an easy-to-guard layout, quick freeway access and a smaller house for sale next door that the Secret Service might like for a command post.

That house is now in contract. It was listed at $1.7 million, but The News learned last night that the still-secret buyers are hoping to knock down the price to $1.1 million.

Both properties back up to large estates, including the Hicks' manor, which is already protected by a small private security force.

"If he moves next door, we'd love it," Hicks said in an e-mail to The Associated Press. "The Secret Service would make the neighborhood safer!"

Hicks, who also owns Dallas Stars NHL hockey team, bought the Texas Rangers from Bush and other investors in 1988 for $250 million - turning Bush's original investment of $605,000 into a $10-to-$14 million windfall.

The Bushes had lived in Preston Hollow before but sold their home there in the 1990s when Bush became governor and moved into the executive mansion in Austin. They plan to keep their ranch in nearby Crawford, Tex., as a weekend getaway.