Please consider, therefore that there is nothing chimerical about this beautiful residence park. There is no speculation as to its future,...its importance will increase as the city expands.

This is how the Munger Brothers first touted their new development that had replaced a 300 acre cotton field on the eastern edge of the city limits.

A City Beautiful inspired grid of 20 blocks made up the first addition. Uniform setbacks, architect designed homes, utilities brought in from the alleys, and a protected ribbon of green space flowing in front of these impressive residences created a distinctive and aesthetically pleasing neighborhood attracting the city's most prominent families. 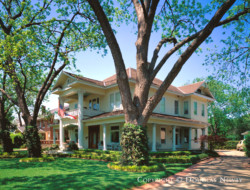 The requirement that every home must be designed by an architect created flourishing residential practices for Lang and Witchell, Anton Korn, Charles Burger, C.P. Sites, Bertram Hill, Marshall Barnett, Hal Thomson, C.D. Hill, and Fooshee and Cheek who went on to design great houses in Highland Park and monumental commercial buildings downtown. 5305 Swiss Avenue was the first house and the only frame house to be built on the boulevard of Dallas' first prestigious planned development. Like all the new homes built on Swiss Avenue it had to cost a minimum of $10,000 while the houses on Gaston Avenue had a reduced minimum requirement of $5000, on the north side of Junius $4000, $3000 on the south side and $2000 on Worth and Tremont which resulted in mostly frame houses on these streets. The new paper, The Dallas Morning News, on June 30, 1907, described the house being built on Swiss Avenue for Dr. R.W. Baird as colonial. On reflection it is a four square with eclectic elements seen throughout the neighborhood. 5303 Swiss Avenue is embellished by two story Corinthian columns supporting a Neo-Classical portico. A Georgian inspired four keystone rondell pierces the pediment. The gable is sheathed in painted split Cedar shingles that are utilized on most of the Munger Place frame houses. The double parlor floor plan, the higher than 10 foot ceilings and large asymmetrical wrap around porch indicates the Victorian influence. The Frank Lloyd Wright inspired geometrical glass design of the operational side lights reflects a pattern of beveled and leaded glass used throughout the neighborhood.

Not only was 5303 Swiss Avenue the first house built on the boulevard, but it was the first home to be issued a restoration permit after Swiss Avenue became a historic district in 1973 ending twenty years of neighborhood decline. In 1978 it became the first home to win "Dallas: Restoration Home of the Year Award." This early home surely was what inspired the design of the many similar but smaller homes with neo-classical columned facades on Worth and Victor in Munger Place, also in Junius Heights adjacent to Munger Place and in Winnetka Heights in Old Oak Cliff besides early Highland Park and University Park.

5303 Swiss Avenue encouraged the popularity of frame prairie style vernacular houses that make up many of the older neighborhoods. The emphasis and embellishment of these homes was on the front facade with a focus on the wide front porch. The facades on these simple boxes have a certain majesty. They draw from a wide range of architectural influences. Dormers might include a mission style, Tudor, as seen in the half-timbered gables and craftsman bracketing, is often used under the eaves. Grouped or banded windows of the Prairie School is common. Houses on every street in Munger Place, regardless of their dominant style, express some horizontal element of Prairie style such as the horizontal stone sills found on Swiss Avenue. Rookwood tile made in Cincinnati, Ohio, that is found throughout Munger Place shows a penchant for the turn of the century arts and crafts movement.

5303 Swiss Avenue represents the beginning of a new era. As the cardinal point of this new planned development it proudly stands equal to the brick mansions around it. More importantly, it influenced an entire generation of residences more modest in scale, but homes that captured its proportions, presence and elegance. 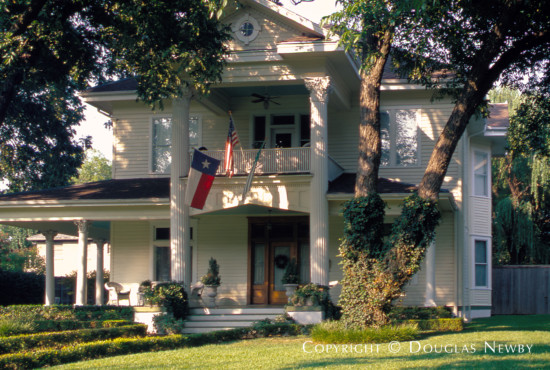