The renovation of this internationally important residence, including reclaiming the pool and floating dining room island, was completed in 2007.

Comparable to Edward Durell Stone's international projects, this 1957 Park Lane project was his most important and favorite residential work. While he is known for his monumental projects, his interest in architecture began in Fayetteville, Arkansas, where he entered a lumberyard sponsored birdhouse competition, which he won. He was from a very wealthy family and had a much older brother, already an architect, whom he joined in Boston. His brother sponsored him for the Boston Architectural Club where he drew and studied. He then went to Harvard and MIT on scholarship, studying architecture with an emphasis on the Beaux Arts style.

Early in his career he was named chief designer of the Radio City Music Hall at Rockefeller Center. He then designed the Richard Mandel house in Mt. Kisco. This was the first international modern residence on the East coast. Its white cubes and cylinder were built of concrete and steel with connecting strip windows much like those found on this Park Lane house. 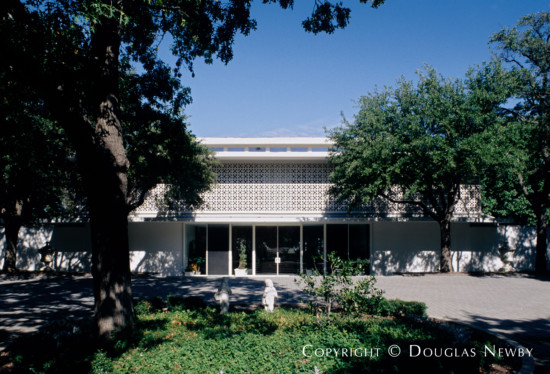 The art and museum circles had a very positive reaction to his work. The Kowalskis asked him to design a modern house for them. After this house, the non-art circle said, "that's enough." The Mt. Kisco community went to the zoning board and outlawed any more modern houses.

Stone went on to design a group of houses for Mr. and Mrs. Henry Luce and also worked on Carl Koch's parent's home where he used cloistered gardens to protect the home visually from the Victorian homes of Cambridge surrounding it. In 1937, Edward Durell Stone designed the New York Museum of Modern Art, the first international modern building in New York. The member's lounge had a wall of glass with a wide opening to a roof terrace. This became the prototype of New York penthouses and museum plans. Twenty years later, he incorporated the same design for the master bedroom opening to the peristyle with domed skylights in the Park Lane residence.

Conger Goodyear was the president of the museum when he had Edward Durell Stone design his home on Long Island. At the same time Maurice Fatio was designing 40 room houses on Long Island, Stone, for the Goodyears, did a very practical home -- one not relying on servants. He extended the ceilings to provide a sheltered roof overhang and he separated the cars with a walled garden, another feature you will see at the Park Lane home.

Periodically, politics would reenter his life. In 1946, the son of the Panama President was the developer of the El Panama Hotel. Edward Durell Stone teamed up with Thomas Church to build this modern hotel absent of corridors, emphasizing cross ventilation, balconies, terraces and whole areas open to walled gardens.

During this period in the early 1940s, Frank Lloyd Wright became a big influence and good friend. In 1953, Edward Durell Stone married his second wife whose father was a Florentine architect and whose mother was from Barcelona. Through her influence, Stone became more interested in opulent materials. The pinnacle of Stone's career seemed to come between 1955 and 1957. In 1955, he designed the U.S. Embassy in New Delhi with similar characteristics to the Park Lane home. Frank Lloyd Wright called it "one of the finest buildings in 100 years." Further, Stone designed his own home in New York, a brownstone that he sheathed in his trademark brise soleil, the US Pavilion at the Brussels World Exposition and this home on Park Lane.

Edward Durell Stone was constantly working on eliminating halls, which he considered to put a stranglehold on floor plans. He also did not want to make a housewife a servant to a utilitarian kitchen. He wanted the kitchen to be a living space - somewhere he could enjoy making a martini. In this Park Lane home every room has a wall of glass opening into a courtyard.

At the Park Lane home the 100 foot open space is defined by hand carved mahogany screens and metal columns. Cylinders of sunlight are deposited on the floor, creating a striking pattern of circles. The concrete brise soleil on the façade allows light, but protects the home from the harsh Texas sun.

Here, the kitchen, bedrooms and closets are generously proportioned, even by today's standard. The open plan dominates the design with light coming in from the perimeter rooms in all directions. The combination of openness and privacy comes from the Thomas Church designed courtyard extending beyond every glazed wall. What Douglas Newby finds really remarkable is the house looks private and closed from the outside and open and exposed from the inside. Edward Durell Stone executed a practical plan and opulent materials. The marble is from Danby, Vermont, cut and polished in Italy. Robsjohn-Gibbings designed all the doors and much of the furniture.

This home has been the focus of world attention. Stone featured it, along with the New Delhi Embassy, on the cover of his book. The home has been the place of memorable parties and great civic events. Until the water around the floating dining room and swimming pool were filled in, guests routinely fell in. The home fell in great disrepair and was saved by the renovation of Jan and Robert Crandall. The current owner continues to appreciate this collaboration of Edward Durell Stone, T.H. Robsjohn-Gibbings and Edward Church when they were all at the top of their careers, designing this architecturally significant home. 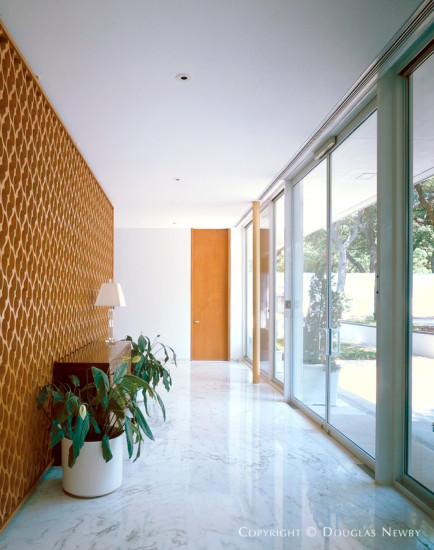 "A Neighborhood Embraces the People you Enjoy and Who Enjoy You"