It is beautifully sited on a hill that slopes down to Turtle Creek. The current owners, rather than dividing up their large lot, acquired a half-acre parcel that had been sold off decades ago. This land reunification project has created one of the largest and loveliest sites in Highland Park. It also provided the land to have an addition in the same Mediterranean architectural style and detail that creates one of the most glorious courtyard gardens in Highland Park. This architecturally significant home is a good example of original architecture being preserved and an original home being enhanced by the detail and proportions of the original architecture that continues on to the additional structures.

4321 Overhill, built by Hugh Prather in 1923 has a stunning arched stained glass window framed by two Spanish Colonial carved columns and extended capitals. The largest stained glass window in Highland Park is possible because of the 30-foot ceilings in this section of the home. Dozens of patterns of brightly colored randomly laid mosaic tile are found throughout the house. You will see mosaic tile also on the dome at The Mansion, another Turtle Creek house. 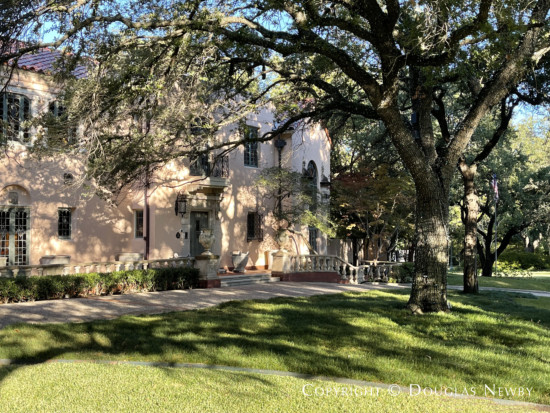