A new architectural addition to Volk Estates is the home designed by New York architect Tom Kligerman. When selecting an architect to design a home, Dallas homeowners occasionally go beyond the incredible pool of talented Dallas architects. This Dallas family retained Tom Kligerman, FAIA, to design a shear-Shingle style home for them in Volk Estates. While the home’s style is rooted in the northeast seaboard, it expresses the feel of the Volk Estates neighborhood, its site and the feel of the original 1920s era homes found in Volk Estates. Tom Kligerman designed this home with similar size and massing as the homes found in Volk Estates, a neighborhood specifically designed for estate homes. He also designed this home to relate to its site, which influences the home’s architecture and nuance in profound ways.

The subtle convex curves of the home follow the curves of Turtle Creek which Volk Estates was designed around. The dramatic implication of these curves on the inside of the home, with expansive windows and glazed openings, is that as one moves through the house, the sunlight and shadows move across curved walls at different times resulting in patterns of sunlight and shadows throughout the day. This shear-Shingle style home draws from the 1920s historicity and elegance of the era while offering a bold artistic expression of a time honored shingle style.

Dallas has the richest collection of 20th and 21st century residential architecture in the country because of talented Dallas architects who created and perpetuated the regional style (Texas Modern) that has received national recognition for 100 years. Other Dallas architects have drawn from the great Dallas estate home architects of the1920s and their interpretation of European architecture. For 100 years some Dallas homeowners have retained national and internationally recognized eclectic and modern architects based in New York, California and major cities across the country to bring their ideas to Dallas. This has created a greater variety of architecturally significant homes in Dallas and a cross pollination of architectural ideas making Dallas aesthetically a richer city.

The design in this Volk Estates home designed by nationally recognized architect Tom Kligerman advances the arc of architecture both in Dallas and across the country. When I first saw renderings of the home I thought of a wind taut sail of a schooner. From a solid mortar-washed first floor, the house ascends to become light- and air-filled like a wind-taut sail. Punctuating the gently curving mass of the house are folded flat planes. One might think of this house as architecture expressed as origami. Above the doors the pinched gables protrude from the shingled facade. The solid base of the home evokes the curving hull of a ship. The dense foliage of the curvilinear site provides the frame of this home that celebrates nature, which was the central feature of the neighborhood’s design. 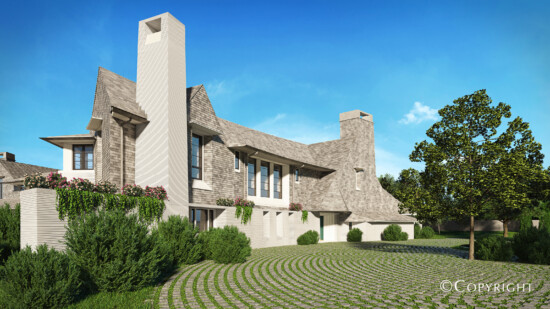 Side View of Thomas Kligerman Designed Home in Dallas