Many consider this Highland Park home designed by Mark Lemmon to be the most historically significant home in Highland Park and maybe Dallas and North Texas. Richard R. Brettell, the former director of the Dallas Museum of Art and founder of the Dallas Architecture Forum, co-authored with Willis Cecil Winters, FAIA, and former Dallas Parks Director, the book, Crafting Traditions—The Architecture of Mark Lemmon. Edmund P. Pillsbury, the former director of the Kimbell Art Museum and the Meadows Museum, wrote the introduction to this book on Mark Lemmon. Ted Pillsbury wrote that, “Mark Lemmon (1889-1975) was the most important historicist architect of 20th-Century Dallas.”

While you might not be familiar with Mark Lemmon, you certainly will be familiar with his work—the church, chapel and buildings at SMU, the landmark churches and schools across Dallas and Texas, and the buildings he designed at Fair Park.

The architecturally significant home at 3211 Mockingbird Lane, is a home Mark Lemmon designed for himself and his family. When an architect has the courage and perseverance to design a home for himself, his toughest client, the home is predictably exceptional in both construction and architectural quality. This Normandy style cottage is both. The foundation remains in place and stout for over 100 years. The interior solid core doors have the weight of most exterior doors. The original hardware is intact, and the gold foil imbedded with butterflies, flowers and leaves is beautifully preserved in the entrance hall. This Normandy cottage reflects the architectural excellence of Highland Park and Dallas, its history, and its aesthetic giants like architect Mark Lemmon.

Mark Lemmon designed 3211 Mockingbird Lane in 1924. Mark Lemmon's wife, Maybelle Reynolds Lemmon, explained that "During World War I, he was in charge of 250 men in a transport division. During the night, he would bring supplies to the men on the front battle lines in France. His nightly travels took him by the Country French homes in Northern France, this later kindled his desire to build a Country French style home once he was back in the states after the War." Mark Lemmon fulfilled this dream by building his own home at 3211 Mockingbird Lane. He designed this home not only in a Normandy Country style, but also in a Normandy like setting. At the time, the home was overlooking the greenbelt that continued on to Dallas City Hall. Reminiscent of town commons, a forest was down the lane where now sits Highland Park United Methodist Church and Central Expressway was a railroad right-of-way. The other side of this right-of-way had not yet been developed. It is my belief that the McNeny Brothers, who initiated Greenland Hills, were simultaneously influenced by the charm and popularity of Lemmon's Normandy cottage for their large cottage development on the M Streets.

Lemmon designed the attic to be shelled in, which he did eight years later. This also coincides with M Streets where attics are still being converted to additional bedrooms. Inside 3211 Mockingbird Lane, you will find hand-hewn beams in the living room and massive two- to three-inch thick doors leading to the formal rooms and library, in keeping with what he saw in the French countryside. The original roof was constructed with an elaborate scheme to resemble the thatched roofs of France. This was done by successfully reducing the amount of wood shingles exposed on each row and repeating the pattern every five rows. The eyebrow effect was randomly built in the roof by gradually increasing then decreasing the number of shingles on various rows. The original roof lasted 45 years. The embossed lead gutters and downspouts were added later when they were purchased at Harrod's in the 1950s on one of Lemmon's trips to London. 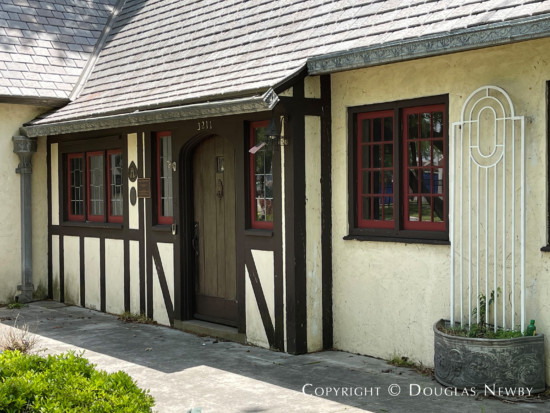 Original wrought iron fixture Mark Lemmon installed in the entranceway of the Normandy cottage he designed at 3211 Mockingbird Lane in Highland Park.

Mark Lemmon obtained from Europe gold foil embedded with leaves, branches and butterflies that he used in the entrance hall for his own home in Highland Park at 3211 Mockingbird Lane.