Young modern architects in 1950 explored form that followed function, diligently evaluating family needs and designing rational approaches for those needs while investigating modern materials to fulfill their design, and always searching for a site equal in importance to the home.

Artist Donald Vogel's goals were much the same, however, he approached the design of his home instinctively without the rational intervention of a modern architect. His 4200 square foot home and studio might be considered Eclectic Modern because it was not tethered to a school, a style or a movement. It incorporates both a north wall of factory windows and Shoji screens that separate the master bedroom from the green house, recessed paneled cabinets that define the kitchen and wood beams that support the ceiling. Even the footprint of the home is borrowed from the foundation of an eclectic house that burned.

Vogel approached the house emphasizing simplicity and durability. Split pavers from Colorado are utilized for the floors. Wall surfaces consist of unpainted plaster, the fire place is large, created from black metal, the beams are substantial and made from center heart red furr from Oregon, and the factory windows span from floor to ceiling. The honesty of the palette and textures create balance and clarity in the multi-use living room. Throughout the house, in each room a door to the outside provides freedom for every family member.

Donald Vogel was raised in Milwaukee and trained at the Art Institute of Chicago while his wife trained in theater at Stanford. They moved to Dallas where their lives were devoted to the arts which were just begining to blossom in this emerging city. As a young married man, Vogel desired to build a home and studio filled with music, books, art and flowers. In 1953 Vogel discovered and acquired at the undeveloped northern edge of Dallas five pastoral acres with spring fed White Rock Creek running through them. His home, gallery and garden evolved into an oasis now surrounded by thriving commercial and residential neighborhoods.

A visitor quickly recognizes in this home the passion, the immediacy of the design and its simple grace that was created by an artist for himself, his wife and their three children. The result is a home not by an owner pretending to be an architect, but that of an artist or composer who conceives a piece and allows his artist friends to enhance his visions or fine tune a dimension. John Wesley Jones who was a Fort Worth furniture maker and architect suggested a 13.5 foot height for the ceiling versus the intended 15 foot height, and also contributed working drawings. John Watson who introduced architectural lighting to Dallas in a meaningful way, designed and installed the landscape lighting. In 1969 in exchange for a painting, Clarence Roy created the plans for the five acre garden for which he later won a national award. Joe Lambert, who is synonymous with Dallas' finest gardens, did the installation on this property. Betty McLean Blake, an art patron, provided the financing for the home as the house was not conventional enough for a bank mortgage.

A Texas style compound was spontaneously developed as needs grew for a frame shop, separate gallery, greenhouse and studio. It came to be known as the Valley House, and informally as the second art museum in Dallas. The gallery opened in 1954 with an exhibit that included Matisse, Pissarro, Monet, Renoir and Chagall.

In a city known for its generosity, Vogel opened his home to visiting musicians, artists, dignitaries, groups, families, and friends. He created a happy place where people could come and be inspired. When asked how a painter was able to create a place that had such a special impact on institutions, people and the arts, he quotes his mentor from Chicago, Malcolm Hackett, "If you are sincere in what you are doing circumstances will connive to see that you are able to do so." Photos available - Exterior, interior of living area, pond, garden, and others 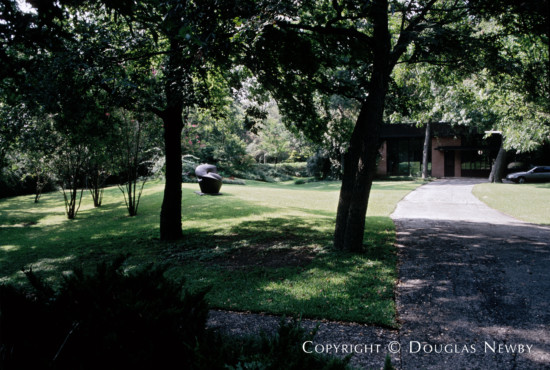