Architect David Williams originated the Texas Modern Style inspired by Texas and Louisiana indigenous homes. The home at 6292 Mercedes Avenue in Wilshire Heights Neighborhood in Dallas that he designed for Ray McDowell in 1927 is where David Williams jumped off from the blatant Spanish Colonial eclecticism prevalent in the 1920s and designed a more “Texas Colonial” style home reflecting the indigenous qualities of East Texas and Louisiana. As architectural historian Jay C. Henry wrote in his fabulous book, Architecture in Texas 1895-1945, David Williams’ work was further inspired by the colonists led by Stephen Fuller Austin in 1821. David Williams said, “Their comfort demanded a little beauty and a great deal of taste. There is not in any one of these houses built in the Southwest before 1850 an instance of imitation of foreign styles, of sham, of striving for effect, of any use of unnatural, unnecessary ornament or of material not structural and fit for its purpose….Their style is modern, for it satisfies all the requirements of modern design and construction.”

The home in Wilshire Heights in Old East Dallas at 6292 Mercedes Avenue is the precursor to the home David Williams designed at 4408 Saint Johns Drive in Old Highland Park in 1932. This home in Old Highland Park also had tall windows marching across the front of the home, as well as open, connecting rooms with beamed ceilings overlooking verandas and gardens.

A year later in 1933, David Williams designed his most famous house at 3805 McFarlin Boulevard along Turtle Creek in University Park. Muriel Quest McCarthy placed a photograph of this home on the front cover of the book she wrote, David R. Williams, Pioneer Architect, bringing greater awareness to this home most closely associated with the Texas Modern style architecture he created. You can see the similarities between this home and the home he designed at 6292 Mercedes. The living rooms of both houses are one room deep to allow windows on three sides, they have wide passageways to visually connect the rooms and the interior of the home with the exterior porches and verandas. Both homes also have the indigenous pioneer look of a home possibly built in stages, with three structures with different heights joined together.

The Appeal of 6292 Mercedes Avenue is Derived from its History, Architecture and Site

From the street, the appeal of 6292 Mercedes is obvious. The home is graceful with an unassuming style and is set back from the street, exuding raw architectural elegance. The home becomes even more intriguing as you learn how this home became the architectural foundation of the enduring design and style of Texas Modern homes designed over the next 100 years. Muriel McCarthy wrote that the Ray McDowell home on Mercedes was the first house built that incorporates the indigenous Texas architectural concepts. She cites Southwest Review, writing in their spring 1933 issue, “The first attempt in the Texas style’ was the residence of Mr. Ray McDowell in Dallas, built in 1927.”

One of David Williams’ favorite designs was an example of what he called Texas Colonial. Historian Muriel McCarthy explains that these homes of his generally had a two-story central building, a formal balance, and a more informal wing on the west. These homes are constructed of brick to stay within the colonial tradition and have particularly thick walls, with the exterior white-washed in white paint to reflect the sun to keep the home cool. These homes often had fully functioning dark green shutters to shield the afternoon sun. Large windows and French doors allowed the air to circulate freely and open to screen rooms for terraces. The master bedroom has three exposures to allow a good breeze and closets on the outside walls with windows to include sunlight and fresh air. You will also find at 6292 Mercedes Avenue exposed beam ceilings, warm woods in natural finishes and a graceful staircase. Most of David Williams’ homes have a decorative motif which is carried through the house as a unifying theme. In this home you will see the carved gentle moldings around the fireplace and in other places in the house. The home at 6292 Mercedes also has French doors that open to a terrace paved in marble blocks originally imported by David Williams from another historic building. The large circular tile shower in this home is an element that David Williams repeated in other homes he designed.

There are high-profile streets in Old East Dallas and Lakewood – Swiss Avenue, Lakewood Boulevard, Tokalon Drive and West Lawther Drive all come to mind. These are all high-profile streets because they have lovely homes, large lots, and they are on streets with much traffic. The reason Mercedes is a high-profile street is because it has lovely homes, large lots, and the only real traffic it has are walkers, runners and bike riders who make a point of going down the street because it is so enticing. Alderson Street, on the side of 6292 Mercedes, is a bucolic spine that runs through Old East Dallas and links to Swiss Avenue and to downtown. Alderson Street becomes the Katy Trail of Old East Dallas because the tree-tunneled streets are so attractive. How many blocks are there in Dallas like this one on Mercedes that exude a sense of neighborhood and community as serene and peaceful and has homes that are set way back from the street and enjoy the neighborhood homes which are also sited on acreage? The 6200 block of Mercedes is the only block that comes to mind. This block is spectacular as are the surrounding streets.

Some niche neighborhoods project prominence and prestige regardless of the size of the homes. One might think that famous real estate developer Trammell Crow’s children have the best taste and ability to find these neighborhoods for their own homes that they selected. One son has just one of a handful of six-acre estate properties that back up to Turtle Creek. A daughter has one of the most architecturally significant historic estate homes which is located in a small pocket of Volk Estates. Another son owns several acres where Rock Creek flows into Turtle Creek in the tiny Turtle Creek Park neighborhood, and another son has an exquisite estate property on acreage in Wilshire Heights. Here is a family that knows real estate and knows Dallas, and these are the neighborhoods they chose for their own homes. The home that architect David Williams designed at 6292 Mercedes Avenue, is found across the street from one of these Crow family estates in the Wilshire Heights neighborhood.

This architecturally significant historic home at 6292 Mercedes Avenue is widely loved. I have always loved the home and now ask myself what are its characteristics that instantly draw me and others to it. The wide and deep lawn in front of the house gives it a particularly gracious setting that it shares with other estate homes on the block with similar setbacks. But it is more than that. The home has familiar lines and a classical feel to it without being over-adorned with eclectic styles and details that rotate through the decades of architectural fashion. The simplicity and honesty in its architectural form was very much intended by the architect, David Williams. He deliberately moved away from a Spanish Colonial style so prevalent in Dallas and Highland Park, a style which David Williams himself was so adept at designing. Bringing in elements of East Texas and Louisiana antebellum homes brought him closer to his Kansas sod house roots and his fascination with the early pioneer homes of Texas. The organic look and massing of the home reflected a pioneer period in the previous century when Texas homes would gradually be added onto. And the sense of honesty of this home clearly comes through. Even if one does not have architectural training, the integrity of the architecture is evident.

The tall windows marching across the home suggest a light-filled home where the space and open connection of the rooms are given more consideration than the artifice of massive moldings or extravagant ornamentation. When one enters the home, one’s hopes are fulfilled. Upon entering the home, one senses the dignity of the home, the grandeur of the large rooms, including an 18x14-foot dining room and a 27-foot living room looking out onto the terraces and the front, rear and side gardens. Nature is the underlying theme of this home, as its design submits to nature – a bucolic site of tall trees and wide lawns. 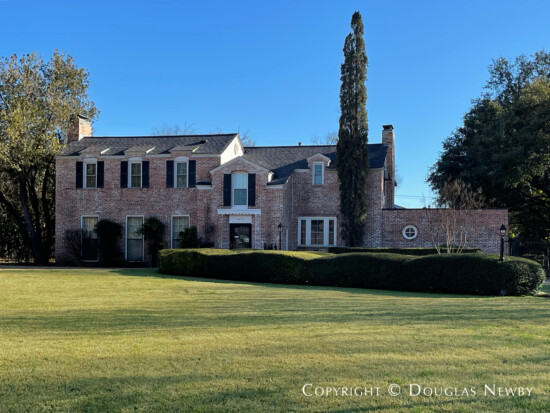 A view of the rear facade of the David Williams designed home at 6292 Mercedes, the pool and a hint of the pool house next to it.

David R. Williams: Pioneer Architect is a spectacular book written by Muriel Quest McCarthy that lets us know about the origins of Texas Modern architecture and the brilliance of David Williams, the mentor of architect O'Neil Ford. Several pages of this important architectural monograph are dedicated to this home at 6292 Mercedes where David Williams first included indigenous Texas design elements.

Small pool house shows the depth of the .82 acre lot at 6292 Mercedes Avenue in Wilshire Heights.

Architect David Williams designed this historic home in cascading segments of the home, each lower in height and depth, to create an architectural massing reflecting early Texas pioneer homes that were enlarged as time went on.

Here in Wilshire Heights neighborhood, you will find this home at 6292 Mercedes, where you see in this image a more recent three-car garage with attached informal guest quarters that was added when the original one-story brick garage attached to the house was converted to a guest bedroom.

This Wilshire Heights estate home was designed by architect David Williams in 1927, who initiated the Texas Modern style of architecture.