The early modern home at 5017 Swiss Avenue expresses the architectural influence of Frank Lloyd Wright and Louis Sullivan. The carved band of Sullivanesque detail, the Sullivanesque relief ornamentation on the dormer,under the deep eaves, and on the panel between the second story windows are outstanding examples of the Progressive Style and Prairie School architecture. This ornamentation emphasizes the streamlined horizontal lines of Frank Lloyd Wright’s designs.

Corridors and Hallways Are Eliminated on the First Floor, Opening the Floor Plan

The traditional center stair is placed to the side, further opening up the space in this early 20th century modern home. Large, wide and tall windows become the focus of the rooms. One sees a backdrop of green from nature and sunlight streaming into the rooms when the sun is low on the horizon. The molding, detail and cabinetry are clean and simple. The ceilings are high and the floors are hardwood.

Wide pocket doors and very spacious cased openings connect the large interior spaces. Extending from the porte cochere, a wide front porch wraps around the house, creating additional living and entertaining space. This exterior living space is all the more attractive as it looks out and across the landscaped Swiss Avenue boulevard to majestic estate homes or to a view of downtown’s architect-designed buildings. With four bedrooms and three living areas, this historic modern home is well suited for entertaining and is also comfortable for a family.

A guest, parent or nanny might enjoy the two-story quarters, surrounded by a garden and pool. The quarters are sited away from the home, but connected by a covered open walkway to the home.

Svend Fruit, known for his exquisite modern work, refined the interior design of this home. You will see their influence in the windows, kitchen and breakfast room, master bedroom suite, and in the organization of rooms.

The 5000 block of Swiss Avenue is one of just three blocks that were part of the first addition of Munger Place. In 1907 Robert W. Foat, as reported in The Dallas Morning News, was one of the first to buy and build in Munger Place. His Progressive home with Prairie School elements cost $15,000 at a time when the deed restrictions required the princely sum of $10,000 to be spent on the construction of the Swiss Avenue homes.

Like 5017 Swiss, the early Swiss Avenue homes were placed on larger lots, had taller ceilings and were, and still are, architecturally imposing as they were designed by the best architects in Dallas, including Lang and Witchell, Hal Thomson, Anton Korn and C.D. Hill. Dallas’s prominent families lived in these homes including the Higginbotham family and later O.C. Nelms, and Senator Kay Bailey Hutchison. The homes on this block reflect the best architecture and craftsmanship in the city. Since Swiss Avenue was made a historic district in 1973, it has been protected for over 40 years while so many of the prominent homes of Highland Park have been torn down and replaced with different styles and scales of homes.

In 1903 Victorian homes were still being built in Dallas as seen in the Wilson Block. Munger Place, described as the first residence park in the entire Southland, introduced Progressive architectural design derived from the Prairie School. These early modern homes were bold, straight-lined and handsome. At 5017 Swiss Avenue the distinguishing characteristics as identified by architectural historian Judy Dooley are the tall piered brick columns highlighted with geometric relief forms and the smaller octangular wooden columns with Sullivanesque oranament of vegetable forms overlaid on geometric lines, both of which are typical of the Prairie School. The relief panel on the second story incorporates a more unique modern spiral design.

On Swiss Avenue a 5,000 square foot home still looks like a mansion or stately estate home because of its relationship to the boulevard and the matching scale and setback of the other architect-designed homes on Swiss. The early modern home at 5017 Swiss Avenue is in the middle of the block and is next door and across the street from beautiful and architecturally significant homes. 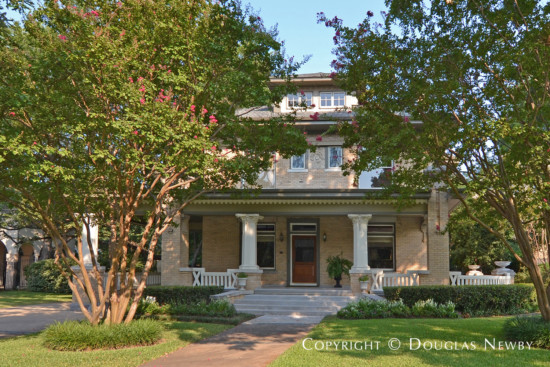 Sunroom Off Kitchen, Overlooking Pool and Garden on Swiss Avenue

View of Kitchen From Breakfast Area in Swiss Avenue Home

Garden Beyond Pool and Guest Quarters of Home on Swiss Avenue

Balcony Overlooks Pool and Gardens of Home on Swiss Avenue

Pool Next to Walkway Connecting House With Guest Quarters and Garage

Sitting Area Next to Morning Room of Swiss Avenue Home