Thoughts on the Contributions of Architect Quinlan Terry

Quinlan Terry, an Internationally recognized English architect, designed a major work in Dallas, The Highland Park House. Quinlan Terry is further evidence that Dallas continues to attract the finest International architects to Dallas. The Classically designed home on Preston Road feels at the same time a city home, with it’s efficient motor court and strong presence from the street, and a gracious Dallas estate home as it sits high on several acres that sweep along Turtle Creek. 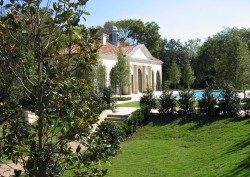 Quinlan Terry creates a classic design with a building technique of solid stone masonry that has been perfected over the last few centuries in Europe. This majestic use of stone not only influences the design but creates a house that is environmentally sound and stand centuries. Educated at the Bryanston School and the Architectural Association, he formed the partnership of Erith and Terry in 1962 with his teacher, Raymond Erith. This eleven year association would further heighten his development and understanding of Classical architecture and award him honors such as the Best Modern Classical House 2003 by British Georgian Group and a Driehaus Prize in 2005 for the most prestigious award for outstanding classical and traditional architecture.

Quinlan Terry continues to pursue Classical design employing time-honored and contemporary materials and techniques in projects seen in England and the United States.