The House of Three Rooms is an architectural project that I admire and Marc shared how he approached this modern home.

Marc McCollom: I designed it to be gracious, with generously scaled spaces that were cleanly composed and clearly organized.

It was important to be a good neighbor; I used the single story volume of the library to mediate between the scale of the main house and that of the street. The other three houses on the corner are all first generation.

The composition and materials needed to be appropriate. Screaming “Modern” was not important to me, a beautiful house was. The overall form wanted to be clean and refined, the shapes and materials honest. The front and side elevations were studied especially carefully; every piece of cut stone cladding was drawn and dimensioned.

Some parts of the house that could seem contrived are actually natural results of the design process. The balcony hangs from the roof mainly because I do not like the way columns hit the ground. The twin fireplace flues are exposed at the interior partly because a typical chimney would have been too skinny. The ceiling of the master bedroom is concave because I wanted the room to breathe in tandem with the sleeper. The ceiling of the west bedroom is convex to connect the room with the canopy of the live oak outside the overscaled window.

I also designed the landscaping, with the help of Jim Vaughn and Scott Nance. The landscape that is there now is essentially the same one I showed in the very first schematic site plan; it has always been part of the house itself. 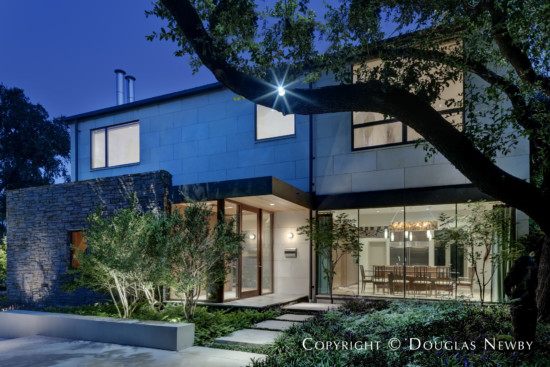