This classic Northern Hills historic home for sale is sited on an elevated lot in the middle of the block on the crest of a hill overlooking the charming historic homes on Cragmont, shaded by a canopy of trees. This one-and-a-half block quiet, tree-lined street terminates in Highland Park on one end and the Katy Trail on the other end. Topography, trees, seclusion, significant architecture, and a pleasing scale protected by the Northern Hills Conservation District are just some of the reasons this Northern Hills enclave of 60 homes is the most desired neighborhood in Dallas. 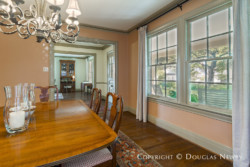 What is more pleasing than the charming graciousness and architectural significance of a 1920s historic home and a floorplan more open than many new builder modern spec homes. Double and triple open passageways connect the rooms. Banks of windows line the walls. In many rooms this allows one to stand and look across the house to see sunlight coming in from four different directions. The spacious rooms have definition, but the sightlines are unimpeded.

Front porches serve as a preliminary entry. They extend the living space of the home and they connect you with your neighborhood and neighbors. The wide front porch across this Northern Hills home adds greater pleasure as it sits high on an elevated lot and allows views of the charming house, but also provides privacy. This historic home’s front porch is oriented to capture the breezes from the southeast that drift across the streams and creeks in the neighborhood and through the trees which makes being outside pleasant even on a warm day.

A Perfect Size for Easy to Expand Northern Hills Home

Some historic homes for sale are difficult to expand without compromising their historic design or historically significant attributes. Here is a home large enough for a family or the perfect size if you are empty nesters downsizing. The kitchen is already open to the informal living room, but it can be expanded by squaring it off with the rest of the home. The large master bathroom can also be expanded and new master bedroom closets added by building over the expanded kitchen. The original architectural integrity of the home will remain intact.

A Protected Enclave of Prestigious Homes Surrounded by Vibrancy

For 100 years, Northern Hills has been a neighborhood of prestigious homes and prominent residents and civic leaders. Understated and elegant, this neighborhood is so popular because a block away you will be able to pop on the Katy Trail or walk around the corner to your favorite restaurants and shops on Knox/Henderson and the Knox retail area. Just two miles from the Arts Districts and just over a mile to SMU, you will have the easiest access to the cultural amenities of Dallas and the attractive neighbors surrounding you.

In the 1850s, Dr. John Cole acquired 5,000 acres that made up Cedar Springs. This township competed with Dallas for the county seat. Developers gradually purchased this land for developments that included parts of Highland Park, Oak Lawn, State Thomas and other uptown neighborhoods. The last remaining land to be sold was the land with the highest elevation with a ravine plunging through it. Northern Hills was developed in the 1920s as an enclave of prestigious homes for prominent residents.  These homes for important residents included this architecturally significant home that was built in 1923 by P. O'B. Montgomery, Sr.  It later became the home of Mr. and Mrs. Henry S. Beck Sr., and eventually became the longtime home of Becky Sykes, the former president and CEO of the Dallas Women's Foundation, and Larry Sykes, a neighborhood and civic leader. 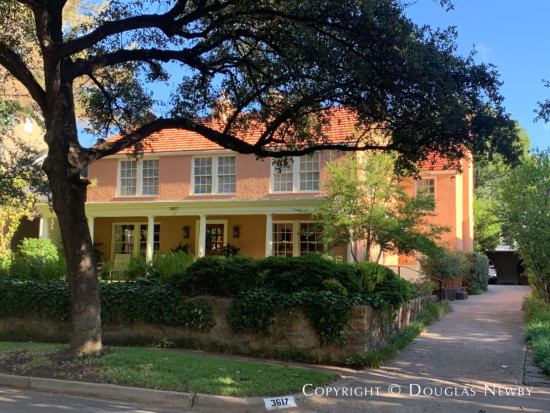