In 1950, Frank Lloyd Wright began his only residential project in Dallas. This home, designed for John Gillin, was completed after three years of construction in 1958, Wright's last home constructed before his death. The home was designed in response to his client's enormous Texas architectural appetite, the Southwest climate and its site of seven acres overlooking a creek. Elements drawn from a 70 year career can be found in this home. The acute angles of 60 and 120 degrees give intimacy to the rooms with ample light-filled space and volume that is unusual for a Frank Lloyd Wright designed home. Long horizontal walls of native stone and horizontal bands of windows converge to create a dramatic entry under a hexagonal copper dome. A module of equilateral parallelograms is organized around a massive angular fireplace. Angled geometric shapes are found in the roof, the elevation and the details of the house. 9400 Rockbrook draws more on his Arizona houses and Arizona Biltmore Hotel than the Midwestern homes he designed early in the century. This home, with an abundance of stone and brick, a concrete roof and copper detailing has survived well. 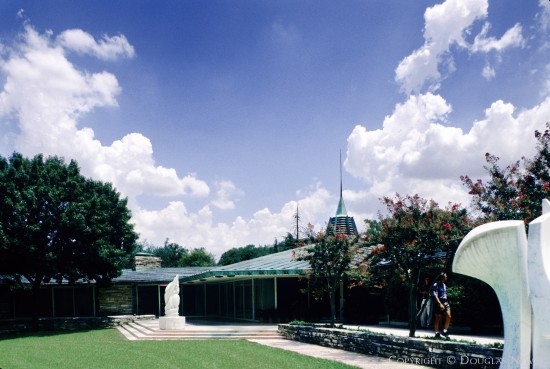