In 1932, David Williams built his last private home which also was his first home to become widely recognized and applauded.

Elbert Williams, Mayor of University Park and no relation to David Williams, was a perfect client for the culmination of David Williams' private residential practice. He was familiar with his work and he imposed no monetary restraints. Furthermore, David Williams moved in with the Elbert Williams family for several months so he could observe and interact with them to delineate their needs. Williams was determined to reflect the needs, desires, and personality of the family in the home.

The suburban site chosen was a low bluff overlooking a bent leg of Turtle Creek, running through University Park, which along with Highland Park, resisted annexation to the surrounding City of Dallas. 3805 McFarlin was designed with all the visible symbols that might characterize a modern Texas indigenous house. It has a standing seam copper roof, white-washed brick, balconies on three sides, many large fireplaces, tall windows with shutters operated from the inside, and adornments of carved wood and stamped metal stars. It is scaled to the larger homes in the community, but it is proportioned to give it a certain modesty. The facade is inviting rather than imposing. The home is comprised of three separate structures joined together, descending in height and width. The front and rear facades are brick, the side facades are frame and the metal roofs are all standing seam. A west wing shields the verandahs and patios from the late afternoon Texas sun. Just as the visible elements are pure Texas, so was the approach to construction. The center structure consists of a living room downstairs and a master bedroom upstairs. This part of the house was built first so the living room could be utilized as a workshop for the completion of the home. In the best of pioneer tradition, the woodwork, fixtures and rugs were made on site. This collaboration of artisans and architects was essential for the graceful conclusion of a home that is dignified and yet possesses an "anonymous folk quality" (Prairie Yield) that has endeared itself to its inhabitants and to Dallas for generations.

O'Neil Ford did not contribute to this home as he did to 4408 St. John, but his brother, Lynn Ford, carved much of the wood and made the furniture. Bub Merrick hammered out the lead trim and copper light fixtures. Jerry Bywaters, the future director of the Dallas Fine Arts Museum, and Thomas Stell painted a mural depicting the building of a Spanish mission on the brick wall over the living room fireplace. Painted Texas wildflowers appear on glass paned doors and various woodwork. David Williams' favorite icon was the lone star and he used it extensively on his houses. At McFarlin, they were stamped out of the metal trim by the front door, and interspersed between the scalloped wood ceiling molding in the dining room above the walls finished with 12" painted pine. Stars were also carved into the dining room cowhide covered chairs made for this home. Sheepskins were sewn together to make the dining room rug. Belle Ford, O'Neil and Lynn Ford's mother, an avante garde weaver, hooked the rugs for the other rooms. 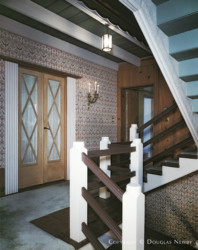 The exterior of this residence emphasizes its horizontal composition by the three joined rectangular structures. The interior reaffirms the horizontal nature of the home. A person can stand in the dining room on the first floor of the tallest structure, and look straight through the entry room, the living room, and into the library which makes up the one story structure on the other end. What is surprising when a person first walks through the front door is the dramatic vertical element of the home. First, one notices the 12 foot ceilings, and then the carved wood stair railings that continue to turn around landings until they stop on the third floor. The interior walls are painted, varnished knotted Pine or exposed bricks. The living room ceiling beams cantilever over the patio serving as a structure for the porch roof. Besides the several sleeping porches, all of the interior rooms have shuttered windows to the stairwell for additional circulation.

Just as O'Neil Ford had the opportunity to build a one room studio for Jerry Bywaters in the spirit of a pioneer room home, David Williams took the opportunity to create a room in the same spirit on the second floor of the attached rear section under the copper cupola for two of the children. Here we see Williams at his primitive best; a room lined with wood with built-in stacked and curtained bunk beds trimmed with scallops enhanced with the carpenter's draw knife, a built-in chest and a hammered metal light fixture hanging from a ceiling made up of exposed beams and roof supports. The room also had its own raised balcony and sleeping porch overlooking Turtle Creek.

Only after David Williams accepted President Roosevelt's request to come to Washington, D.C., did 3805 McFarlin receive local and national attention. Finally, in 1937 this home was featured in Better Homes & Gardens (June, 1937, pg. 32, Better Homes & Gardens) when Dallas journalist Wayne Gard, with fresh enthusiasm from the Texas Centennial, wrote the article, "The Ranch - House Goes to Town" which was illustrated with photographs and floor plans. This article instigated a country-wide clamor for ranch houses. Ironically, the houses designed by Dilbeck, discussed in the first Eclectic section of this book, are more closely derived from Williams' Texas ranch houses. Nevertheless, diluted versions of rambling "ranch" houses sprang up around the country for the next several decades. (Mary McCarthy, David Williams).

Just two years earlier, his houses did not receive near the same level of acceptance and recognition. In 1930, David Williams designed 4408 St. John. Despite this being one of his finest homes, House Beautiful and many other magazines would not even consider it for competitions because it was not a design they could recognize or identify. Nevertheless, this house initiated an enduring style that has flourished over 70 years. The home on St. John, designed for Wolford Cain, drew on the same East Texas and Louisiana influence as 6992 Mercedes, but it further refined its orientation and incorporated the elements that make us think of Texas.

The outside of the home is white-washed to reflect the sun, the balcony porches are positioned to catch the breeze, vertical shutters protect the tall windows. The masonry arches create transitional rooms from the inside to the outside. They also tie together the two perpendicular sections of the home designed to shield the home from the sun and provide a sheltered garden. The terraced garden has stone and brick stairs and pathways that serve as a natural extension of the house.

The inside surfaces include rough wood planks, varnished wood, unpainted surfaces and natural plaster. These provide a rich contrast of dark and light, rough and smooth, dull and lustrous, accentuating the craftsmanship and texture of a home built by artisans. The pegged floors, diagonal pattern of the wood ceiling separated by beams that continue uninterrupted to the porch are elements that continue to appear in Texas modern houses. In 1991, Frank Ryburn, AIA, was retained and successfully restored the home to its original design and finishes.

Arch Swank, AIA, recalls in the introduction of Mary McCarthy's book, David R. Williams, Pioneer Architect "David Williams became involved with mass housing, resettlement and restoration for various government agencies and was able to involve such talents as Richard Neutra, Robert Alexander, Oskar Stonorov, Louis Kahn, Hugh Stubbins, Vernon DeMars, Eero and Eliel Saarinen and O'Neil Ford. While David Williams never went back as he intended to a residential practice, he remained a strong influence on his friends, colleagues, Dallas and the architectural style he initiated. Two years before he died, Williams modestly wrote to the jury of fellows of the american institute of architects

I beg to assure you sirs, that I consider O'Neil ford far and away my greatest contribution to architecture. 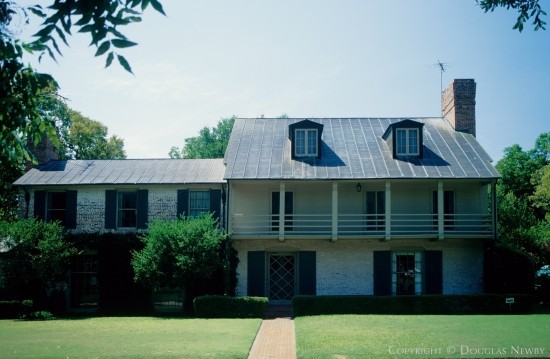